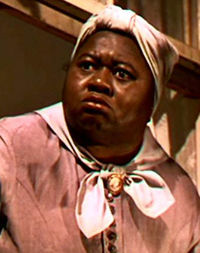 In general I think I have a good—actually great—job. I love working with students to push them toward excellence and who do the same for me. I love researching and writing about things that matter to me and hopefully have an impact on serious issues confronting our communities. I love that I pretty much set my own hours and work on a schedule conducive to my needs. I love the fact that I have been able to travel to 6 of the 7 continents and share ideas and perspectives with colleagues both locally and internationally. As I have said regularly being a full professor at a research-intensive university is one of the best jobs in higher education. But there is one aspect of my job I cannot stand and over the past few years it has been occurring with increasing frequency. I call it the “Mammy Moment.”

The Mammy Moment happens when other colleagues—especially White women—expect the Black woman (it’s almost always just one of us) to be of service to them. For me, it rarely happens with White men. My White male colleagues typically just recruit me to be on their “team” when they mount a fight. They don’t expect me to fight for them. But, I have recognized that many White women colleagues want me to FIX things for them! I am not talking about folks who come to you with life’s problems—tragic illnesses, death, problems with their spouses and partners, or with their children. I am talking about grown women who believe the fact that they didn’t get a promotion or elected to a position requires a major intervention from me. I’m somehow Mammy and Oprah all wrapped up in one and somehow I should march into the “offender’s” office and demand that my White woman colleague be avenged. I am talking about White women colleagues who know they are being lowdown and cut throat but expect you to look at mess and called it blessed!

The Mammy Moment happens when no matter how hard I work my opinion is discounted and/or ignored. After all, Mammies are all but invisible. They take care of everybody but they remain in the background. What they have to say is nothing more than some “Black” noise. But why this is starting to bother me is that when I entered the academy White women worked hard to convince me that we were “sisters”—a part of a sacred sisterhood who would help dismantle patriarchy and attack male privilege. How foolish was I?

The myth of the feminist movement was that for far too many of us it only included White middle class women AND instead of working for a more equitable and humane society many of these women just wanted to occupy the positions of power and prestige of the White men. They did not want to remake institutions; they wanted institutions to make them the ones in charge. My role in this institutional change was to be available to mother them and be grateful that I am there to support and aid them.

As my career winds down I am so much less patient or content with the Mammy moments that keep arising. I understand that my relationship with White women peers is fraught with tension and asymmetry. What I thought was going to be a feminist “revolution” has become just another set of oppressive relationships but this time my oppressor wears a bra. Mammy is tired of comforting Missy Ann cause Mammy got her own “chillen” to take care of!

One thought on ““Moving Past the Mammy Moment””