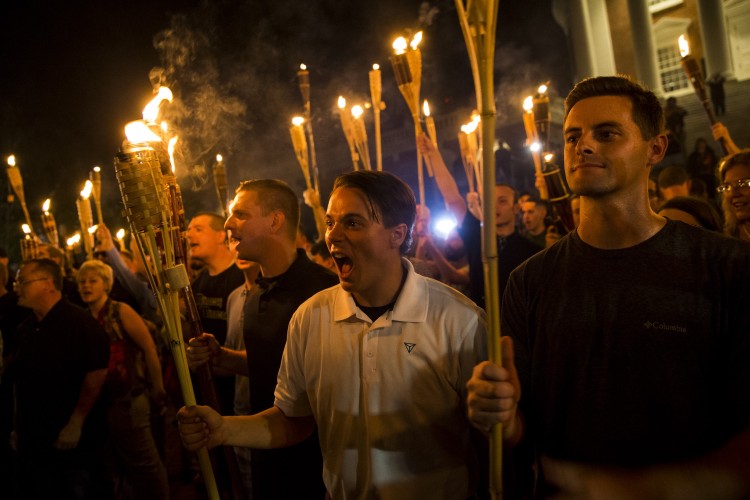 One of the frustrations of having been a student of US History is the recognition of the ahistorical nature of our society. Every time we see something that is a direct connection to our history we hear people talking about it as if it were a brand new thing. This past weekend we saw yet another example of how White supremacy remains an ongoing thread throughout American society and culture. The so-called alt-right and White nationalists marched through Charlottesville, Virginia in a show of force. Their protest was met by a counter protest and before long one of the White nationalists drove his car into a crowd of counter demonstrators killing a young woman. Additionally, two law enforcement officers in a helicopter monitoring the protests were killed when their chopper crashed.

Our airways are filled with outrage about the presence of these White nationalists but frankly they represent exactly what the nation has been fueling for centuries. Some people are pointing a finger at the current resident of the White House but I would argue that he did not create these racists; he is a product of them. I contend that our current president has no ideology outside of what ever benefits him. He learned that he could create adoration by attacking former President Obama in the vilest, most vicious ways. Racism sells!

But, the problem we are confronting does not reside just in the young White supremacists. The young people who flooded the streets of Charlottesville were mostly in their early 20s. And, they were about 12 or 13 years old when Barak Obama became president. My husband and I largely shaped our children’s political views at that age. Even as they were older, we talked positively about the president. We shared our pride in his ability to win the nomination and ultimately the presidency. But, what was being said in the households of the Charlottesville marchers. Did anyone contradict the narrative that suggested he was not a “real” American? Did anyone step up and say, “No, Barak Obama is not a Muslim AND if he were what difference would that make?” Did anyone point out that Barak Obama brought the economy back from the brink of collapse and is probably NOT responsible for the job loss that working class White people claim to be suffering (incidentally, Black unemployment always remained higher throughout his presidency). The parents of the alt-right young people raised their children to believe they should win at everything. They should be at the top of the class. They believe they deserve a place on the team. They should not lose at anything so they warrant a “participation certificate” for anything and everything. They believe they are entitled to the best jobs, the best homes, and the best lives.

Now, we see people across the nation clutching their collective chests in horror. And, I recognize a familiar pattern of behavior among White people I know. There are those who are truly upset and angry and deeply invested in attempting to eradicate racism and White supremacy. They represent the minority of the White people I encounter. Then there are those who claim to have clean hands because they divorce themselves from any of the goings-on in Virginia. For example, today at church my Pastor talked directly about the evil that we saw in Charlottesville and what our spiritual response should be. My husband attends a mostly White, Catholic Church. When I asked him if the priest mentioned anything about Virginia he looked at me and said, “You know he didn’t!” Those are the same people who raise their children to believe racial issues are not their concern. A third group of people I encounter are outright racists. They support everything that happened in Virginia, cheer on the efforts of White supremacists, and they have raised their children to do the same. I work hard not to be around those people and I can generally avoid them. However, a fourth group is a lot more troublesome for me. These are the “progressives” or “liberals” who believe they have a right to speak for everyone else. They believe they are immune to White supremacy and racism. However, the causes they rally around tend to be (White) women’s rights, class inequality, or the environment. For them, racism is “so-1980s.” For them, Barak Obama’s presidency proved that we are post-racial. They no longer have time for racism and if their children are edged out of a seat at Harvard or Yale or Stanford, they are the first people who want to re-think affirmative action.

I wish I never had to write another sentence about racism and White supremacy. It is exhausting and debilitating. But, as long as White people refuse to take any responsibility for fostering it—directly and tacitly—I know I will have to keep trying to combat it. Right now all I can say is, “Yo… Come get your children!”