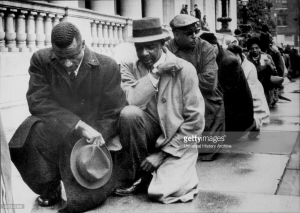 Over the last couple of weeks we have seen various commentators (and commentaries) about how wrong NFL players are to “disrespect the flag.” As a part of a campaign rally in Alabama the President claimed that they were ungrateful SOBs who should be fired for not standing during the singing or playing of the National Anthem. Lost in all of the kneeling, sitting, and locking of arms during the anthem is the man who started it all…Colin Kaepernick AND the cause for which he took a knee.

Last year Colin Kaepernick was a quarterback on the San Francisco 49ers. He began taking a knee during the singing/playing of the National Anthem to call attention to the rampant injustice in the US that repeatedly allows unarmed African Americans to be shot by police officers and most of those officers never being convicted of murder, manslaughter or even wrongful death. By the end of the season, Kaepernick was let go and NO other team picked him up. Some argued that Kaepernick was not “good enough” to be on a team. Kaepernick who recently took his team to the Super Bowl was “not good enough.” And, while experts can disagree I think Kaepernick is better than a number of current quarterbacks. Indeed, even if no team thought he was good enough to start, he is at least good enough to be a back up on some team. I can only surmise that Kaepernick is not on a team because the NFL owners have decided he is too publicly toxic to sign. And, I assume that they have colluded to insure that no one broke the code that said, “Do not sign Kaepernick!”

One of the things we hear over and over about Kaepernick and now the players who are protesting is what they are doing is “not the right way to protest.” So now I ask, “What is the RIGHT way to protest?” The players taking a knee are not disrupting the anthem. They are not causing a scene. They are expressing their Constitutional right not to stand during the anthem. At my university last year 2 of our basketball players decided to step off of the line away from the rest of their teammates during the singing/playing of the National Anthem. Again, it was not disruptive. It was a silent protest and yet at one game I heard a fan yell, “[Player’s name] step up to the line!” The fan disrupted the anthem, not the player!

Colin Kaepernick is right! He was being respectful in his protest and he is paying the price for it. Indeed, a recent post on my social media wall says, “Racism is so American that when we protest racism the average American assumes we’re protesting America!” Thus, if the folks who claim that Black folks are not protesting “the right way” were honest with themselves they would admit that they think the only right way to protest is to be White! 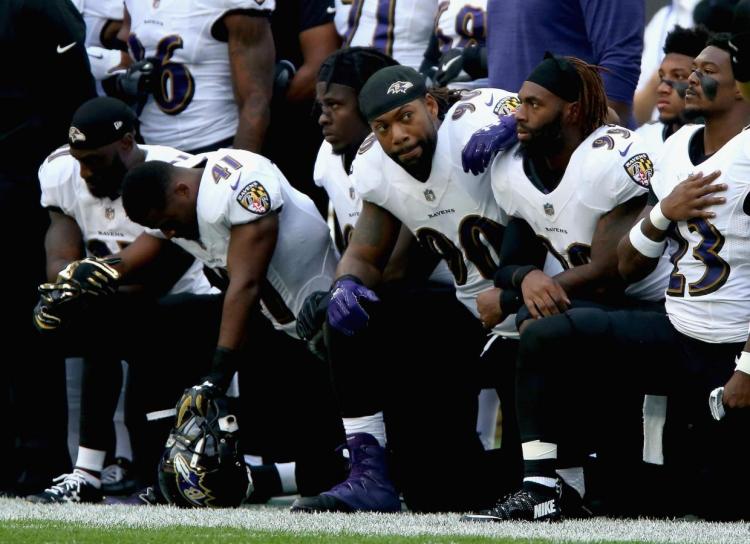 The past month has been filled with travel, the start of schools, and scores of writing assignments with near impossible deadlines. Thus, I have had little or no time to sit down to write a blog. Also, the craziness of events in this nation has been coming fast and furious—so fast that I have just stared at the news reports with my mouth agape. Where do we begin? There were the multiple firings of Spicer, Scaramucci, and Bannon (sounds like a discount law firm, doesn’t it). Then there were the constant reports of the Russian investigation and daily threats to North Korea. When the “leader of the free world” gave a speech to the United Nations General Assembly and referred to another country’s leader as “Rocket Man” I thought we could not sink any lower. But then he headed to Alabama to support the Senate candidacy of Luther Strange and used the occasion to castigate NFL and NBA players who chose to exercise their Constitutional rights to protest by taking a knee during the playing of the National Anthem. He referred to them as SOBs and called on NFL owners to fire them! SOBs!!! Who does this man-boy think he is? How dare he hurl insults at people acting as citizens? What is wrong with him?

One of the people who have been singled out in this is NBA super star, Steph Curry. Curry has decided he would not accept and invitation to the White House should his team decide to go (actually, his team, the Golden State Warriors, voted not to go). Curry is the epitome of the clean cut All American athlete. He comes from a strong, supportive family, completed his college degree, married his college sweetheart and is a doting father. On top of all of that he is an amazing athlete, an avowed Christian, and just the example Americans should want their children to emulate.

But, the Orange Terror (I will never call his name) was deliberate in his attack against Black athletes. It plays directly to his base—White, disaffected, working class people who swear that they are losing ground because of some perceived advantage that Black people have (no data support this perception). His hatred of President Barak Obama is palpable. He still cannot accept that a Black man became president and his entire administration has been about undoing any and every thing Obama did. His endorsement of White supremacists and racists is on record and yet there is always some apologist who will argue that he, himself, is not a racist. I’m sorry, if it looks like a duck, walks like a duck, and quacks like a duck, it’s a duck!

The reference to these Black athletes as SOBs hits at the very heart of racist sentiments in this country. Black women have never been able to claim their full humanity or womanhood. They have always been regarded as over sexualized units of labor. They not only had to endure the N-word, they have also been subject to the B-word. So now the so-called president is calling them B-word! What can I call his mother—mother of an adulterer, mother of a sexual predator, mother of a liar? Trust me if I had a chance to see him face-to-face I would not mince words. I would not pretend that I had to respect the office because he has already disrespected it so many times I cannot count. I would tell him he’s a liar, a cheat, his feet stink, and he don’t know Jesus!!! He just better not call MY sons, SOBs!