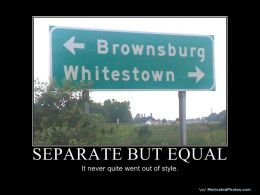 In 1820 members of the African Colonization Society began a repatriation movement to return formerly enslaved Africans in the United States to the continent of Africa. Their settlement began as the Republic of Liberia. In 1917 Marcus Mosiah Garvey established the United Negro Improvement Association (UNIA) to help the African diaspora organize to return to the continent. In the 1960s the leader of the Nation of Islam, the Honorable Elijah Muhammad advocated for a separate section of the United States, located in the South, where Blacks in America could live in peace. Most African Americans have argued for the principle set forth in the landmark 1954, Brown v. Board of Education decision that said in public policy “separate is inherently unequal.” So, none of the proposals for a mass movement away from the rest of the nation, especially Whites, has ever taken root. As Black people we have wanted to be a part of the grand American experiment.
But, there have been moments! And today, after receiving the news of a Ferguson, Missouri grand jury that failed to indict police officer Derron Wilson for shooting young Michael Brown, Jr. to death. is one of those moments. To be sure, I would have been shocked if the grand jury returned a murder one indictment for the White police man. But I had hopes that perhaps a manslaughter charge could have been rendered. It was not to be. The news of no indictment hit many in the Black community hard. Like a lot of my friends I took to social media to vent my frustrations and at the same time many in Ferguson took to the streets. And, while no one wants to see the destruction of property, looting, and certainly not bodily harm I could truly understand the sentiments that led to each of those things. People were mad. They were upset. They were enraged. It all seemed so familiar. It all seemed so predictable. It all seemed so planned. And at the base of this familiar, predictable, plan was the death of an 18-year-old. And I understood that rage.
I understand what it feels like to be so voiceless and marginalized that the only thing you think you can do to get people to pay attention is to yell, scream, burn, loot, and destroy.
As I watched the news coverage of what was happening in Ferguson (and I will say that I got tired of seeing that one car burning) I was seething. How did we find ourselves back in this same place once again? How did we fall for this all over again?
And, while what happened with that grand jury in Ferguson impacted everyone who cares about justice I could feel my tolerance for listening to White voices lessening. I just wanted a little separation from people I felt couldn’t really share my pain. I wanted to crawl into a cocoon of black love and support. I wanted to be in a space where I didn’t have to explain everything. I just wanted to feel and to mourn an authentic Black moment. I didn’t want to hear from Iggy Azalea, Justin Bieber, or Robin Thicke. I was sick of white supremacy and the all encompassing whiteness that had made the Ferguson grand jury decision possible. As I drove my car to work and listened to the radio the White woman on my public radio affiliate began a rant about how much PROPERTY was lost because of “those people.” When I went into my building you would have thought there was a moratorium on speaking. People were amazingly silent and acting in that “if we don’t say anything maybe it will be all right” way. Of course I insisted that students in my class confront the Ferguson issue. I pointed out that they could not call themselves “critical” if they were unwilling to engage the critical issues of the moment.
But as for me…I just wanted some separation. I’d had enough of White folks. For at least the next 24-48 hours I didn’t want to concern myself with taking care of them, making them feel better, patting them on their backs and telling them that everything’s going to be all right. I just need a little separation.