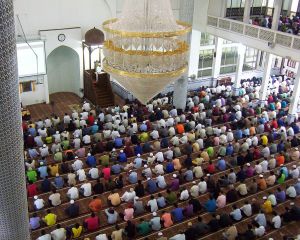 I went to church this morning. It’s something I do almost every Sunday. I don’t give it a second thought. I wake up, get dressed, and drive to church. I attend a traditional Black Baptist church. Almost everyone who attends is Black. I participated in the prayers, the praise and worship, the offertory, listened to the sermon, rejoiced during the invitation when people either gave their lives to Christ and/or decided to join the church. It never occurred to me that some crazed person would enter the sanctuary and shoot up the place.

The feeling I had was exactly the same one those in the Muslim community in Christchurch New Zealand had when they went to jummah or Friday prayer. They went to something they attended on a regular basis with the full expectation that they would see friends and families and pray to God in peace. Why wouldn’t they expect that? Unfortunately, they became victims like those in the Milwaukee Sikh temple, Charleston’s Emanuel AME Church, and the Pittsburgh synagogue. The disease of white supremacy reared its ugly head again and viciously took the lives of 49 individuals.

When most of us heard the news we were horrified, of course, but I’m not sure we gave much thought to it in relation to our personal lives. But, the truth is this could have been any of us. The cancerous hate that was on display in Christchurch, New Zealand is the same hate that is spreading across the US like a wildfire. Hate crimes are up and we are allegedly led by someone who in one sentence claims to be in sympathy with the people of New Zealand and in a subsequent sentence or tweet claims we need to keep out murderers and rapists who are only identified as people from south of the US.

Racism, xenophobia, Islamaphobia, sexism, Anti-Semitism all stem from the same place. It is a place of deep insecurity and feelings of losing a presumed place in the world. It requires people to turn those who are different on any dimension—race, class, gender, sexuality, language, religion, etc.—into “others.” It requires people to turn those who are different into less than human. When I examine my own cultural history I must acknowledge that it took a war and Constitutional amendments to acknowledge my personhood. As a woman it took another amendment to give me citizen rights to be able to vote. So many people have been victimized by hate and exclusion but it seems we suffer from cultural amnesia when the group under attack is a group other than our own.