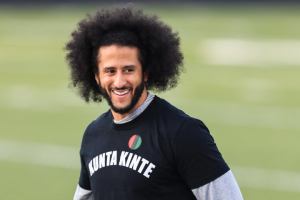 This past weekend many of us who have given up on watching NFL football had a glimmer of hope that we might get to go back to the real national pastime. Former quarterback Colin Kaepernick was planning to participate in a workout to demonstrate that despite not playing football for 3 years, he was still in shape and able to perform at a NFL level. Although I have to say I’ve gotten comfortable not letting football eat up my Sundays (and Mondays, and Thursdays), it would be nice to at least watch the playoffs and the Super Bowl. More important it would be great to see Kaepernick be vindicated and get back to doing something he loved doing.

Alas, it was not to be. The workout venue and rules of engagement were changed at the last minute and only 7 teams showed up. Quickly the media pundits began to expound. “He doesn’t really want to play.” “Why did he show up with a Kunta Kinte shirt?” “Why are all the media here?” The questions went on and on. Some declared that Kaepernick ought to be grateful that the league was “giving him a chance.” Are you kidding me? Let’s look at the facts.

Colin Kaepernick broke no laws. He is not accused of domestic violence or abuse. He is not accused of substance abuse. He was not in a club shooting a gun. He exercised his citizen rights to participate in a silent protest about the condition of Black people and the ongoing police brutality they face in cities and towns all across this country and the person occupying the people’s home at 1600 Pennsylvania Avenue did not like it. For that he has been essentially banned from the NFL for 3 years. Colin Kaepernick is accused of being an “uppity N-word!” That is it in a nutshell.

What makes this situation even more ridiculous is the number of Black sports journalists and commentators who do not realize that Kaepernick’s only crime is that he refuses to be played. According to his camp he refused to sign a waiver that the NFL presented that would not allow him to sue the league or accuse them of collusion.

The truth is the league DID collude to keep Kaepernick out of football. The settlement the NFL reached with him was designed to keep him from exposing their underhanded, plantation mentality—“You dance to our music ‘boy’ or you don’t dance at all!” So whether they paid him $10 million or $45 million doesn’t matter. They paid whatever they needed to in order to ensure their dastardly deeds were not exposed.

I actually don’t see any reason why Kaepernick should go back to the NFL. He has more of a platform outside of it. He can speak more freely, influence more people (particularly young people), and do it without fear of career ending injury. I’m not worried about Colin Kaepernick. However, I am deeply disappointed in Black folks who continue to carry water for the NFL establishment. They have no understanding of the predicament of every day Black people. They have no notion of the suffering that our children endure in schools and classrooms. They apparently have not been touched by police brutality… yet! They don’t understand that the family of Botham Jean asked the Dallas Cowboys to acknowledge their loved one’s unnecessary death at the hands of a police officer who wandered into his apartment and they wouldn’t do it. All they know how to do is act as sycophants for powerful White men who are just as likely to discard them as quickly as they did Colin Kaepernick. Sorry, I’m still with Kap!