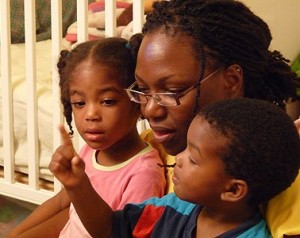 America claims to hold motherhood sacred. We sing the praises of the sacrifice and devotion of mothers…except for one group of mothers…Black mothers!
Because I spend so much of my time working in schools and with educators I have heard a litany of complaints about parents–especially mothers. The other night I was in an electronic conversation about the “school to prison pipeline” and several comments referenced those “bad” parents. Historically, Black women were thought to be the iconic symbol of motherhood. They were so prized that during the period of slavery they were regularly called upon to raise the children of the very people who oppressed them. For almost a century after slavery, Black women would be pressed into service to raise White children. The very image of the “Mammy” emerges from a sense of Black women as “nurturing, asexual, and mothering.” However, sometime after the rise of Republican South (think Richard Nixon and Ronald Reagan) the nation was introduced to the notion of the “Welfare Queen.” She was the Black woman who had figured out how to game the system, not work, collect a check from the government, and live on easy street. I will tell you I have never, ever met a welfare “Queen.” Every Black woman I’ve known who is living on public assistance was barely making ends meet. She always had more month than money. There were times when she had to look into her children’s eyes and say, “no,” to what other parents might see as a minor expense. These are mothers who cannot quickly replace clothing and shoes. These are mothers who cannot go out and purchase some school supply a teacher requests at the last minute. These are mothers who have to give up a necessity to pay for a school field trip or school photos. These are not people living on Easy Street at the expense of tax payers.

Unfortunately, the typical Hollywood depiction of Black mothers is as abusive, unfeeling, uncaring people whose children are neglected and better off without them. Think of the character the actress Monique played in the film “Precious.” If they are shown as loving their children they are also of low moral character–think Halle Berry in “Monster’s Ball (for which she received an Academy Award). Sometimes Black mothers are shown as caring for White children while simultaneously being unable to care for or protect their own children…remember Viola Davis in “The Help?” (You is smart…you is important…).

My mother was one of the most extraordinary women I knew. She was smart, generous, caring and a perfect role model for helping her children navigate the turbulent 60s. She never beat us. She didn’t berate us. She worked hard to ensure we had what we needed and without giving in to everything we want. My own responsibility as a mother has been the most awesome one I have undertaken. I’ve made my share of mistakes but I don’t think any one of them would be placed on the big screen as examples of the horrible Hollywood Black mothers we see.

The Black folks I know rarely end up on an analyst’s couch because of something their mothers’ did. No, they maintain close, personal relationships with their mothers well into old age. Why? Because our mothers are sacred to us. They teach us how to make red velvet cakes, peach cobblers, and sweet potato pies. They teach us how to manage and style our hair no matter what texture we are blessed with. They warn us about love and heartbreak while encouraging us to search for it with our whole heart. Black women will always be incredible representatives of motherhood. What do you think?

One thought on “Motherhood and Sweet Potato Pie”